This August 2014, I will complete 5 years of living in the United States of America. True to the nature of my nomadic life since childhood, I spent 3 years in San Diego and then moved to OC. After living in Maharashtra for 8 years till 2009, this is the longest time I have stuck to living in a particular state. My stay here has been very bitter-sweet. Bitter, made by certain fellow desis and surprisingly made sweet by my other desi and non desi friends. Everybody who I met here, be an American/Asian(non-Indian) or European, has been an amazing person. I learnt many new things about different cultures, lifestyles, thought process and in general, life.

One thing that I have learnt in these 5 years is that the image of India in the eyes of the western world, can be summarized into 3 ‘exotic’ words. Biryani, Yoga and Namaste. According to most of the people I have met, India is such an exotic country, where we eat very spicy curries, say Namaste a lot, do some crazy yoga poses on the drop of a hat and practically live inside the Taj Mahal. A disclaimer, this view is expressed by around 60% people I know. The rest are very well-read or have been to India(my company has a branch in Vadodara, Gujarat and many projects in India for pumps and turbines).

My very first interaction with an American was my Asian classmate, who also became my colleague in the lab later on. She was quite well read and actually practiced Iyengar Yoga that was taught at the school gym. She thought that since I was an Indian, I would be a pro in Yoga and enthusiastically took me for a class after we became really good friends in the lab. She and the African-American teacher, were quite disappointed that I had trouble touching my toes while bending down and I toppled down quite frequently while striking the Warrior pose. But she and my other friends, were very welcoming. We were a bunch of pseudo-racists, who loved pulling each other’s leg about everything under the sun, including their faces, drinking habits and ethnicities. Some of them have had Indian origin friends in schools or colleges but they were pretty much American, so they never really learnt anything about India that was not broadcast on Fox news or CNN or included in a Beatles song. But, Adam would particularly surprise me by talking about Sachin Tendulkar, especially after the World cup win. He was passionate about baseball, so cricket interested him too. Brian would just amuse me no end by pretending to have really limited knowledge of India, but in a funny way.

My friends had told me that the only thing they have learnt in school about India was Gandhi and spices. So, I tried educating them more about Indian culture, lifestyle, different religions, festivals, food, etc. When I visited India and returned, by popular demand, I bought kurtas for them, bindis and bangles for the girls and spent a good part of the week drawing mehendi tattoos for them. It was a task to find a kurta for Brian’s 6’3” giant frame, both in the Indian stores in San Diego and in India. He really wanted it.

Two and a half years back, we had a fabulous time playing holi, and having our own version of bhang(ahem :P). We used to cook and have dinners together since Karen and Chad were my neighbors. So by the time I left the lab, they were aware of the differences between haldi and mirchi, kurta and saree, hum dil de chuke sanam and slumdog millionaire. Here is a fabulous picture of all of us. 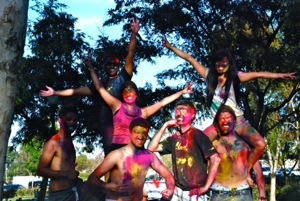 After I joined work, I realized that most people know much more about the Indian culture and lifestyle since many had visited India for business. Yet, there are people here are aware of limited things and end up annoying me just by doing something which they think is endearing. I met a person here in his mid 40s, who got insanely excited when he learnt that I am an Indian. He told me how beautiful the culture is and how respectful Indians are. Everything was okay till the point he told me that he tries to teach his family and kids about respect by showing them Bollywood movies! Every thanksgiving they sit together and watch ‘Baghbaan’ reruns!?!?! I was stunned. Just stunned. After that, every time he sees me, he does this whole process of joining his palms, bringing them to his nose level, bending down and saying out loud ‘Namaste’. I find it very irritating for some reason. ‘Namaste’ is something I rarely say, even in India. I either say Hello/Hi or if they are older relatives or family friends, I touch their feet and say Namaskar, being a Maharashtrian. So this whole rigmarole of doing ‘Namaste’ to me even when surrounded by so many people, I find it just awkward. On my part, I just reply with a hello.

There is another Afghani person on the shop floor, who just loves everything about India, apparently. In his eagerness to show me how much he likes India, he ends up saying the silliest weirdest things to me. He is very fond of meditation and listens to some Shiv chants now and then. He has assumed that I meditate too. He has told me that we Indians have beautiful, pure, white souls and my smile shows him the culture and beauty of India. I don’t know how. In his enthusiasm about explaining how much he adores India and Hinduism, he told me of this picture he shared on FB where a woman has her bre*st out and feeding a monkey baby along with her baby and how he loves monkeys. Errr, awkwardness at a whole another level.

We had a new draftsman join around a month back, and I have started avoiding him already. A couple of days after he joined, I introduced myself to him very politely. He is a middle aged African-American with a good educational background. He told me about how he has been to Mumbai and some other Indian cities for work and how he liked the food there. Ever since then, every time he sees me he says, ”Hello, good morning/afternoon. Where is my Biryani?” Every. Single. Time. Sometimes 4-5 times a day. Initially I laughed and told him that I don’t eat meat, and had a general friendly banter. Then, I started telling that it is in the Indian restaurant down the street and he can go there whenever and get his biryani. Now, I just smile politely and shake my head. Two days back I told him that I don’t know what to say to him anymore.

My previous landlady takes the cake though. She was a 50 year old white woman, who told me excitedly that she spoke to a friend of mine, every time that she would call and speak to a customer care agent in a call center.

End note: My cousin was onsite in Indiana for a turbo training. She is in Cummins. She was asked about India-Sri Lanka issue because that was a hot topic that time. She was asked why were the two countries conflicted. She totally blanked out about the LTTE-Rajiv Gandhi-Tamil-natives issues and ended up telling about Rama, Hanuman, the monkey army, kidnapping of Sita and Ravan. The goras were very intrigued and were fed mythological reasons for the next 3 hours.

I am an IndiBlogger!

More splashes of my life :)